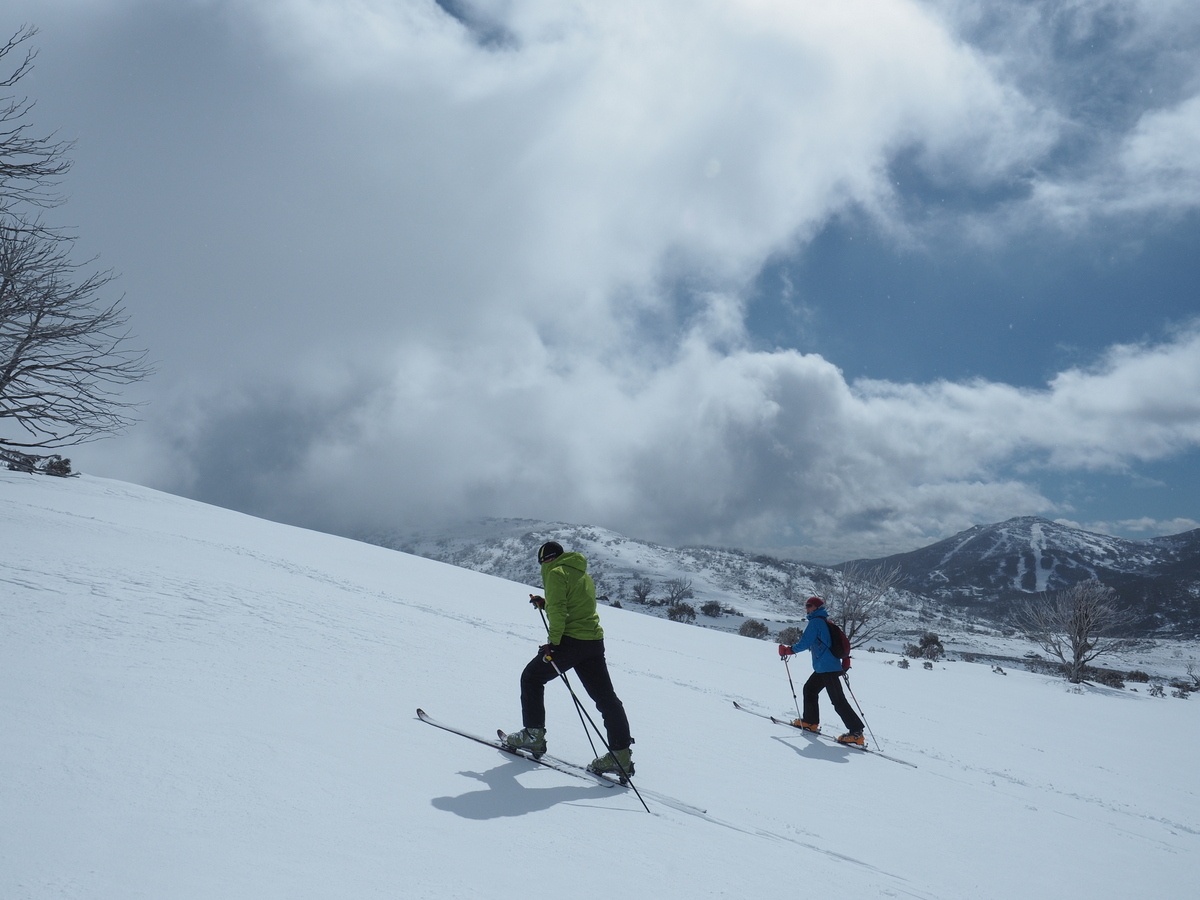 Skiing uphill provides an opportunity to enjoy alpine vistas and warm up if you are cold. You “earn your turns”.

To travel on skis some form of grip on the base of the ski is required.   Modern solutions for getting grip are:

Cross country skiers traditionally used a variety of grip waxes (matched to the snow temperature) in the mid section of the ski but these are now only used by classic ski racers.

Ski tourers and backcountry skiers use bindings that allow the heel to lift off the ski so they can stride forward in a walking motion.  There are two main types of bindings:

A normal walking motion is used to move forward on skis –  weight on one ski provides grip then the other ski is slid forward. This is a simplified variation of the diagonal stride technique used by cross country skiers.

A simple walking stride can be used to ski directly up easy angled slopes. As the slope gets steeper the grip on the snow gets harder to maintain. Some techniques for climbing steeper slopes include:

For slopes that are too steep to ski up directly an uphill traverse provides a lesser angle of ascent.

The angle of traverse is dependent upon the type of snow, slope steepness and the grip of the skis.

Steeper or icy slopes can be tackled using a shallower angle than those with soft and deep snow.

Ascend at a manageable angle, particularly if carrying a heavy pack, or breaking a trail in deep or soft snow.

Uphill kick turns to change direction.  The effect is to zig-zag up the slope.

Uphill kick turns (also known as tacking turns) are effective for turning direction while ascending on slopes up to around 35 degrees.

A herringbone can be used on slopes that are too steep to ski up in a straight line. This method is good for short moderate slopes with softer snow.

If it gets too steep for a herringbone, side stepping can be used on moderate to steep slopes to ascend (or descend) safely.  The skis are moved up (or down) keeping them 90° to (across) the fall line. Keeping the legs flexed is important. Good control of weight transfer and edge control are vital on icy surfaces. Side stepping can be difficult in deep fresh snow.

Reverse these steps to descend.

The forward side step is a variation that combines a forward and sideways step.

Walking in a boot trail

On steep slopes with snow that is not too soft or icy a boot trail can be used to ascend directly.