Many bushwalkers have intense interest in and affection for the wild and natural places into which they venture.

Bushwalking experiences can be greatly enriched by knowledge of local plants, animals, geology and history. This information is available in many bushwalking and field guides available for specific areas.

Group members who can identify particular plants or animals and stimulate group members to observe unusual specimens contribute to the knowledge of others on the trip.

People who develop a greater interest in and understanding of the natural environment usually become stronger advocates for its preservation.

A natural ecosystem is a community of living organisms in conjunction with the non-living components of their environment that are linked together and interact through nutrient cycles and energy flows to form a balanced system.

Human existence is dependent on the survival of the natural ecosystems which supply air, water, food and shelter.

Improved protection and management of natural habitats protects carbon stores and the biological resources and ecosystem services on which human lives and livelihoods depend.

Natural ecosystems are ecologically stable in large, unfragmented areas that can support bigger populations of plants and animals and a greater diversity of species than a similar area divided into small islands.

Large animal populations are at less risk of inbreeding and are better able to accommodate changes in their habitat. Sizeable areas can securely protect the habitats at their core and resist external influences better than small areas with convoluted borders.

Wildlife in large reserves is more readily able to migrate away from areas damaged by bushfire or degraded by drought, flood or infestation.

Large natural ecosystem areas with high diversity of species have considerable resilience. They often have the capacity to recover from disasters which could destroy small populations or monocultures. Healthy natural ecosystems provide invaluable insurance against major environmental degradation or even extinction.

Natural ecosystems are also a reservoir of potentially valuable genetic material which could be used for the production of new products, foods and medicines.

Natural ecosystems are also havens for emotional and physical renewal in an increasingly urbanised society.

Degradation of these systems can result in the lowering of air and water quality, soil fertility, and can  compromise the existence of diverse plant and animal species.

Individuals can influence events and actions at the local level. Each one of us has some impact on the areas in which we live and the places we visit.  It is highly desirable that this impact be positive rather than negative.

Minimal impact bushwalking and skiing provides information on and actions to minimise impact to the areas bushwalkers and ski tourers visit. 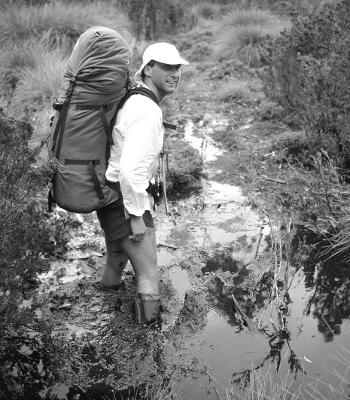 There is continuing political conflict over the preservation of large, intact, diverse ecosystems within protected areas such as national parks.

Scientists and conservationists often work together to preserve areas for their biodiversity.

Bushwalkers, other outdoor recreational users and local communities seek to protect bush, alpine and coastal areas for their landscape values.

Finding a balance between the demands of various groups is a constant challenge for governments and land managers.

Below is a summary of some challenges relating to land use and amenity for bushwalking, ski touring and other outdoor activities.

All types of outdoor recreational activities can result in environmental damage including:

Conflicts between users can include:

The following four internationally recognised environmental principles have been developed by the European Union to inform legal and political frameworks that aim to minimise the ill-effects of human activity on the environment.

3. The rectification at source principle

Wilderness and natural areas around the globe are extremely limited and continue to shrink. Bushwalkers, as major users of these areas, have a strong interest in conserving them in their natural state.

Bushwalkers and ski tourers can familiarise themselves with local environmental issues and protection measures in the regions they visit and advocate for them.

If you feel strongly about a particular issue and would like to get involved in a campaign, ask appropriate groups and/or individuals about their policies and methods and opportunities to contribute.

Beware of Astroturfing – the deceptive practice of misrepresenting an orchestrated marketing or public relations campaign as a “local grass-roots community campaign”.

Collaboration with other outdoor recreational users on joint campaigns can improve outcomes for protection and preservation of natural areas.