Much of the Northern Territory is relatively flat, but there are some disconnected ranges, including the sandstone plateau of western Arnhem Land and, in the south, the MacDonnell Ranges and isolated rock outcrops of Uluru and Kata Tjuta.

The south has deserts which contrasts to the lush, tropical forests near the northern coast. Winter is the best time to walk in any area of the Territory. Permits are needed to walk in some areas.

The Northern Territory has two distinctive climate zones. The north has a tropical climate with high humidity and two seasons, the wet (October to April) and dry season (May to September). During the dry season most days are warm to hot and there is very little rainfall. The wet season has high humidity, tropical cyclones and monsoon rains. The majority of rainfall occurs between December and March. Thunderstorms are common in the afternoons with very heavy rainfall. Tropical cyclones can occur from November to April bringing destructive, strong winds and torrential rainfall.

In the south there are four seasons. In summer it can be very hot and is mostly dry with heavier rainfall possible in January. In autumn and spring days are warm and nights cool and in winter overnight temperatures can fall below freezing.

Nitmiluk National Park (Katherine Gorge) covers a vast area of escarpment country and the main gorge provides some good one and two-day walks. The Jatbula Trail and the Southern Walks tracks provide multi-day walking, while the Baruwei Loop Walk is a short option for views over the escarpment. The Jatbula Trail is a five-day, 58 km one-way walk passing waterfalls, monsoon rainforest, stone country and Aboriginal rock art. Permits are required and should be booked well in advance.

Litchfield National Park is a plateau with a number of well-signposted short walks covering a variety of landscapes and habitats that are typical of this area. The 39km Tabletop Track is a three to five day circuit walk through woodlands and rainforest and visits several waterfalls and rock pools. It is suitable for experienced, fit and self-sufficient bushwalkers only as there are minimal facilities along the track.

Kakadu National Park has some recognised one-day walks to its major features. Longer walks in this large park are all off-track and a wide variety of routes is possible. The route from Koolpin Creek to Jim Jim Falls is one well known seven-day walk. Applications for permits for overnight walks have to be made months in advance.

Tjoritja / West MacDonnell National Park has a variety of good day and overnight walks with road access at several points including Ormiston Gorge, Simpsons Gap and Redbank Gorge (PDF) from which Mount Sonder can be completed as a long day walk.

The Larapinta Trail starts in Alice Springs at the old Telegraph Station, then heads out along the rugged West MacDonnell Range. The 223 km trail leads through an arid desert environment taking 18-20 days to complete.

Watarrka National Park (Kings Canyon) provides some excellent day and overnight walking. The Rim Walk, a 6 km loop, provides extraordinary views of the canyon, and the overnight walk along the 22 km Giles Track from Kings Canyon to Kathleen Springs is also worthwhile.

In Uluru – Kata Tjuta National Park the rock and domes dominate the desert landscape. Good one-day walks can be undertaken here, but overnight bush camping is not permitted. An excellent day walk is the Valley of the Winds walk which winds its way between the domes of Kata Tjuta for a 7.4 km circuit.

Finke Gorge National Park is south-west of Alice Springs. There are short walks (PDF) in Palm Valley that lead through unique stands of red cabbage palm, past rugged cliffs and up to a lookout on the plateau.

Many roads are unsealed requiring a 4WD vehicle to access some areas. When planning a walk check whether a 4WD is required. In the north, many roads can be cut by floodwaters during the wet season. In the south, the heat is extreme during the summer months. Vehicles need to be well prepared. See Vehicle preparation. 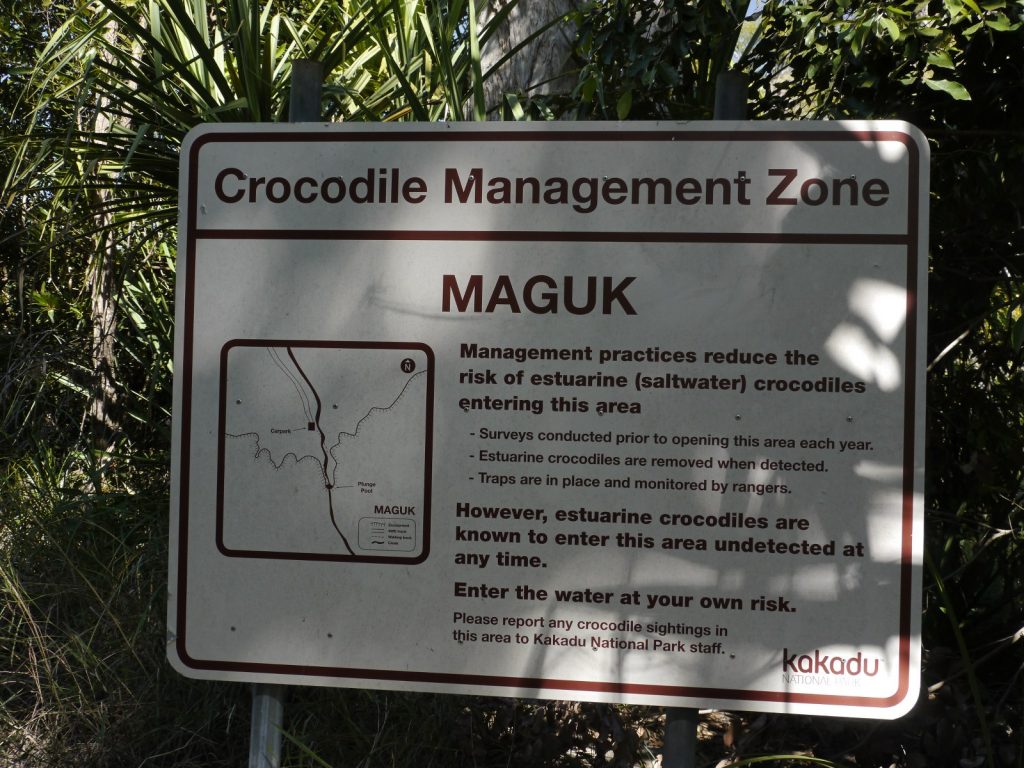 In northern Australia, crocodile attacks have resulted in many fatalities. Take great care near any creek, river, estuary or inlet.

Unless expert local advice and signage confirms that the location is safe from crocodiles:

Crocodiles are a risk in Western Australia north of Port Hedland, the Northern Territory north of Katherine and in Queensland north of Rockhampton.

Cyclone season in northern Australia is generally from November to April. A cyclone is an intense low-pressure system with gale force and higher winds moving in a clockwise direction around the eye. Cyclones can bring destructive winds, torrential rain and flooding, tornadoes and storms, and a storm surge along coastlines where the sea level can be raised much higher than normal.

During the cyclone season be especially alert and monitor the local news broadcasts and weather warnings. See the links and apps below.

Marine stinger season runs from October 1 to May 31 when box jellyfish are more likely to be in the water. Box jellyfish has quick acting venom in its tentacles that can kill a person in less than five minutes. The smaller Irukandji jellyfish may also be encountered. Stings are possible at any time of the year, so wear protective clothing when swimming in coastal areas.

Ambulance cover: essential for all bushwalkers

International visitors should confirm they have travel insurance that covers bushwalking.

Well prior to a trip, each group member should, on their mobile phone*:

Bookmark the websites below, which provide current local advice and emergency warnings.

*Useful only when there is mobile phone network coverage.