For an easy day walk in good weather along a well-signposted track in a National Park, a Parks supplied sketch or mud map is sufficient for navigation.  A mobile phone with google maps and its GPS on can provide an exact location if required.

For longer trips the trip leader at least should have a topographic map and the ability to navigate using map and compass.

For harder or extended trips including any off-track or winter alpine trips, several group members should be well skilled in bush navigation using a map and compass.

For challenging trips to remote areas all group members should be capable bush navigators.

Navigation is learnt through much practice and experience in a wide range of terrain and weather conditions.

Skilled navigation requires observation and concentration, an awareness of terrain, walking speed and the ability to recognise features both on the map and on the ground as they are encountered, so that the group location can  always be determined.

Group leaders are responsible for navigation, but it is not necessary or desirable for a leader to undertake all navigation tasks. Giving other group members responsibility to navigate over a section of the route provides them with the opportunity to develop and practice their skills. The leader should maintain a watchful eye to ensure the correct route is followed.

Handheld GPS are increasingly popular, especially models that include topographic maps. Some bushwalkers now prefer to navigate primarily with a GPS rather than map and compass.

However a paper topographic map remains most useful for route planning and when making route choices, due to its size.  The small screens of a GPS or mobile phone are difficult to use for these purposes.

A handheld GPS should be regarded as another tool that complements rather than replaces skills, knowledge and ability in map reading, navigation and route finding.

This section focuses on bush navigation with map and compass.

To become proficient in bush navigation the following need to be understood:

These can be learnt by regularly walking or Rogaining with capable navigators.

There are also excellent online resources: 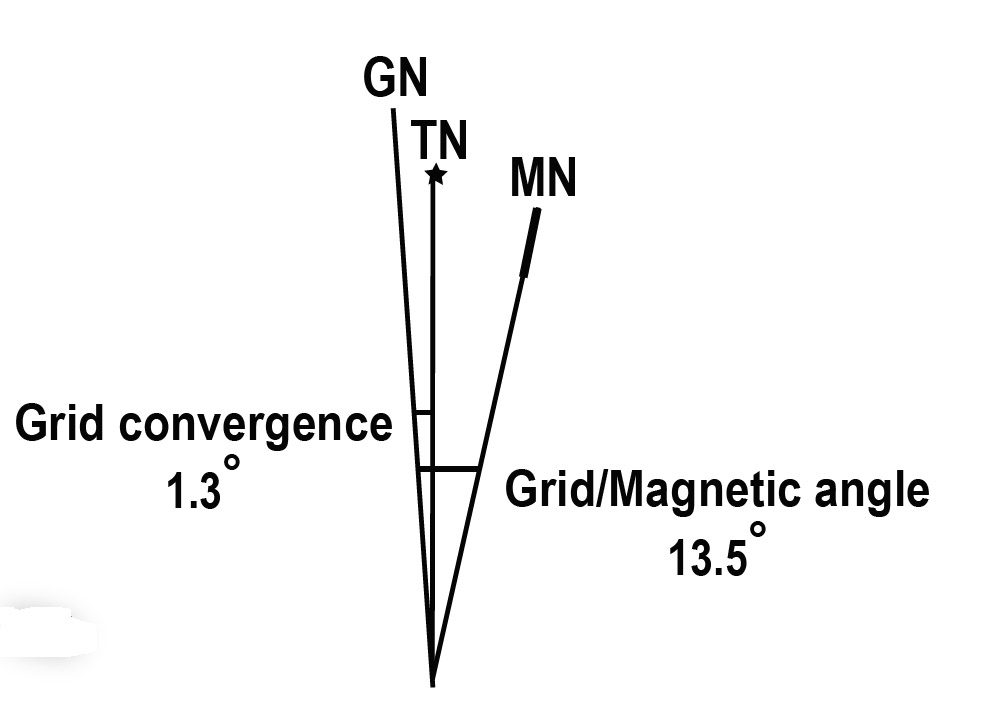 All topographic maps have a diagram similar to this one from an eastern Australia map.

True North and Grid North are very similar, with a difference between them of less than 2 degrees.   Such a small angle on its own would have no practical effect in bush navigation.

Magnetic North is the problem.

In the example above, the Grid/Magnetic angle is 13.5 degrees.  This is key information for the bush navigator whenever compass bearings are used.

A compass bearing is measured on the map from the N/S grid lines and is called the Grid Bearing.

To follow that bearing in the bush, it must first be converted to a Magnetic Bearing, since walking that  bearing will rely on the compass needle (magnetic) pointing north (magnetic).

In the example above, typical for eastern Australia, 13 degrees needs to be SUBTRACTED from the GRID BEARING (the 0.5 deg is too small to matter) to obtain the MAGNETIC BEARING.

A mnemonic can be used to remember the rule, e.g.:

Note 1: Some references and the detailed text on topo maps, refer to the Magnetic North declination changing over time. While this is true the change is so tiny as to be of no practical significance for bush navigation, even if using an old topographic map. Bushwalkers can ignore this.

Note 2: Maps drawn for orienteering and some Rogaining events have magnetic north/south lines on the map, rather than grid lines to avoid the need to correct for grid/magnetic declination. 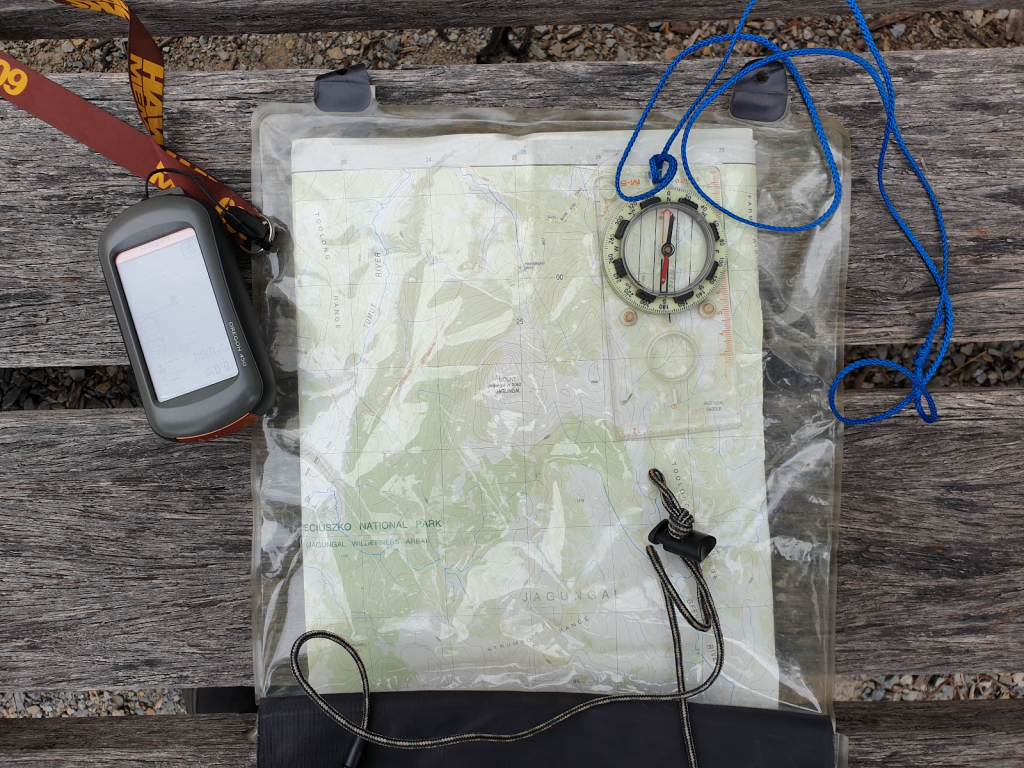 Extensive and varied practice in the field is essential to become proficient in bush navigation with map and compass. Making mistakes is an important part of learning to navigate well. To improve navigation:

In open country or when walking on well mapped tracks in clear weather, navigation is generally done by direct map reading; identifying landmarks progressively while monitoring walking speed.  A good navigator will refer to the compass only occasionally to confirm direction under such conditions.

A navigator must be able to form from the map a mental picture of the country before it is traversed. The terrain should then unfold more or less as has been visualised.

It is best to keep the map handy in a map case and check progress and refresh memory of the route ahead every 10 or 15 minutes and at key features and track junctions. It is important that any errors are identified and corrected early.

If a change of direction is intended at a particular point note where the feature is located.

For example a track junction may be in a deep saddle or on a slope facing gently down in a particular direction. If the first track junction encountered does not match the expected features then the track junction is probably not the correct one so the map should be checked closely.

While the form of the country as shown by contour lines is usually very accurate, tracks can be incorrect on any map.

Some tracks may not be on the map, either ignored by the map maker as being minor, or created since it was drawn. Vehicle tracks may be created during forest management activities including logging and fire management.  Animal tracks (pads) that resemble walking tracks can be created by feral animals such as horses. Some marked tracks may have become overgrown since the map was produced.

In hilly country always note from the map whether the route is ascending or descending. When descending a spur or following a creek upstream take care to observe all junctions. To assist in identifying the location of a branch spur, estimate the amount of height gained or lost. Some navigators use an altimeter for this purpose.

When selecting an off-track route it is much easier to navigate up a spur or to follow a creek downstream (vegetation permitting). This is because side spurs converge going up a spur and side gullies converge going down a gully or creek so there is no confusion at junctions.

On the the other hand when descending a spur it is easy to divert onto a side spur so great care is needed – watch the compass and read the terrain very carefully.

Should the country traversed not match the map stop and carefully check the map and the route taken. Look at the terrain and surrounding features and match these back to the map. Consider whether walking speed has been misjudged or locations where it is possible the group has diverted from the intended route.  A GPS will assist – use the location on the GPS map screen to match with a location on the paper map.

Develop the habit of looking back and memorising landmarks as seen from the opposite direction. For example, when ascending a peak and intending to return by the same route take particular note of any critical points where it would be possible to divert on the descent, which typically will be later in the day when tiredness and limited daylight may be factors. Even if not intending to retrace steps, this may be forced by a variety of circumstances such as bad weather, shortage of time or an injury.

Care with the compass

There are some precautions to take with a compass: