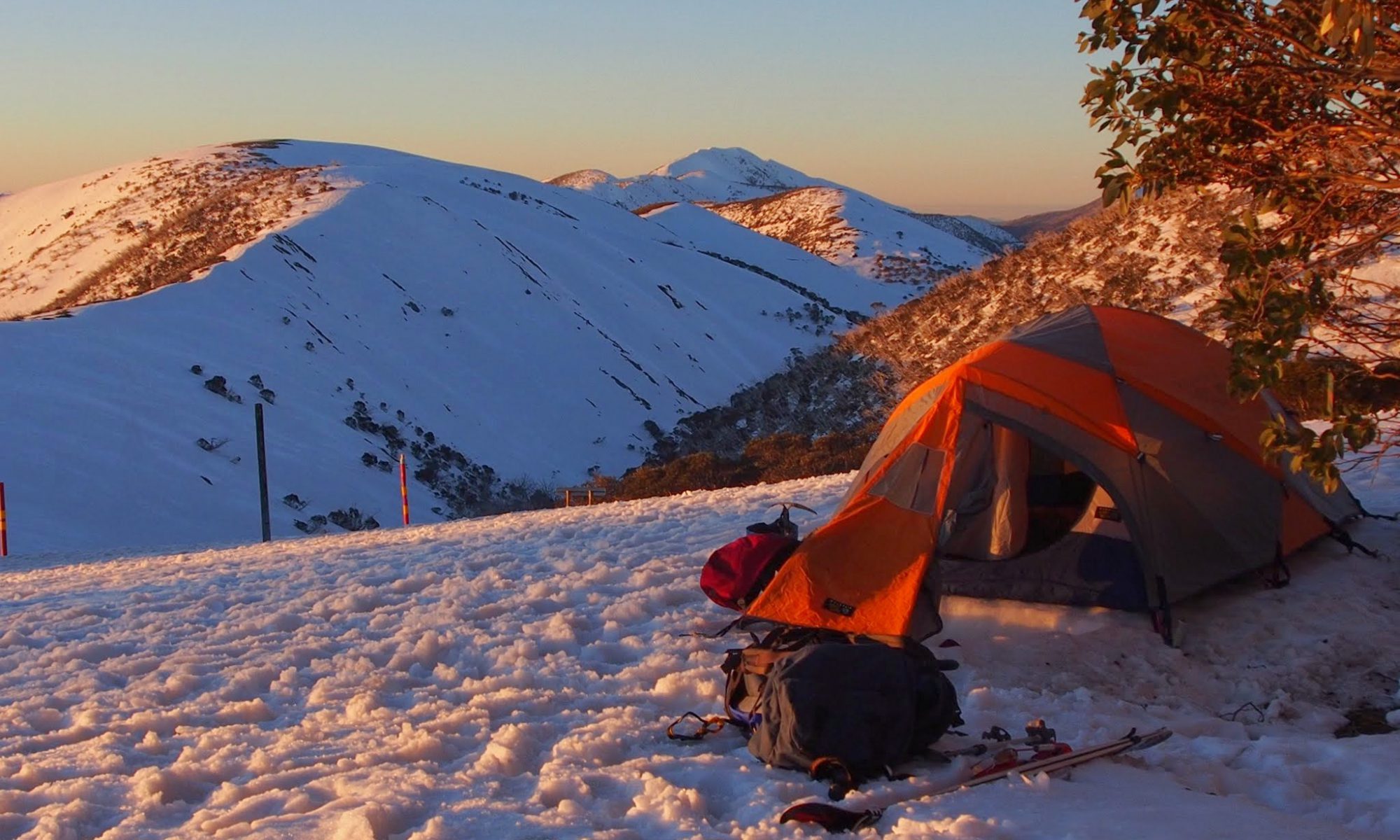 Many people think that there could be few experiences less enticing than camping in the snow. However, snow walking, snow shoeing, ski touring, backcountry snowboarding and snow camping are popular among outdoor enthusiasts.

For a group to enjoy these activities safely and with some degree of comfort, all members must be well equipped and have a sound knowledge of overnight bushwalking and camping skills.

The basics for snow camping are almost the same as for bush camping, the major difference being the higher standard of equipment and knowledge required. There are a number of ‘tricks of the trade’ which can make a big difference to the safety and comfort levels when snow camping.

If snow cover is thin, it may be easier and more comfortable to scrape off what snow there is and camp on the ground, especially if rain is forecast.

Putting up the tent

*These cords, about 50 cm long, should be attached to all the points on the tent normally secured by pegs. If the sticks get frozen in, and usually everything freezes overnight, the cord can be untied or cut and the tent removed. Then there is plenty of room for the pegs or sticks to be removed using boots, a snow shovel or similar tool, without the risk of damaging the tent.

After the tent is pitched

Digging a cave in a deep bank of snow can produce a comfortable and secure living space if conditions are ideal.

However, in bad weather or unstable snowpack, snow caves can be a very dangerous. In 1999 a group of snowboarders died in a snow cave they had dug , near Mt. Kosciuszko, New South Wales. If heavy rain is forecast, building a snow cave should not be attempted.

All things considered, a good snow tent, pitched in a sheltered site or with windbreak walls built around it is generally a safer shelter than a snow cave or igloo.

Carefully select a suitable location for a snow cave.  A good location has:

Do not dig a snow cave:

If unable to assess the above hazards do not attempt to build a snow cave.

Skis should be placed upright in the snow just outside the cave to indicate its location.

Groups should be aware of some serious risks associated with snow caving:

Igloos can only be constructed using consolidated, old snow and there needs to be a significant area of snowpack available. Building an igloo also takes a considerable amount of time, but may be an enjoyable afternoon group activity.

Commence by marking out a circle of the diameter required on flat ground – about 2.5 m is a minimum, but 4 to 5 m will accommodate up to five or six people. Cut blocks of snow about 300 × 300 × 600 mm long, and lay them outside the circle. Cut the blocks from outside the igloo – do not lower the floor level, as cold air will drain in. Igloos are built as a spiral, and the door is cut at the end.

After laying, the first layer of blocks must be cut to form the base of the spiral, by trimming them so that the top slopes inwards, with the height increasing smoothly and gradually from ground level to the full height of the block by the end of the layer.

Continue laying blocks around the spiral, always leaning them inwards. The last block will be round and conical – like a cork from a large jar. The door is cut next to last, and then a protective tunnel can be built. Once inside, smooth the inside very carefully, as any low points will drip. Any cracks should be filled with snow from the outside.

A snow shovel, a pruning saw or a plywood platform used to support a stove could be used to help build or cut blocks. Snow construction can be hot work, so don’t forget to drink while working.