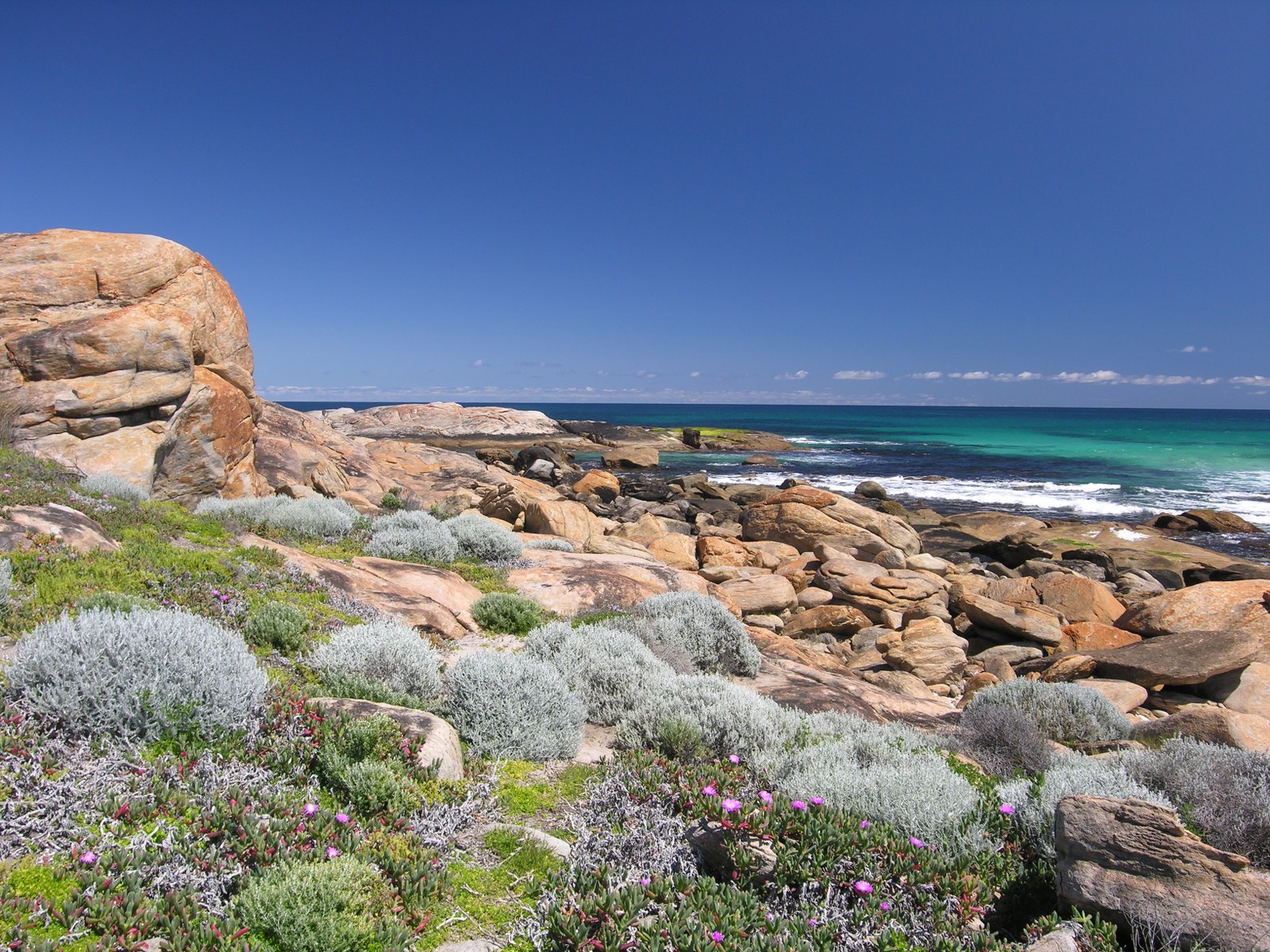 The largest state, Western Australia, has a low population and much of it is extremely dry. There are huge distances between interesting areas. Access is a major planning problem. Most bushwalking is in the southwest corner, but there are interesting areas elsewhere.

Mundaring is an area best known as the heart of the Perth Hills is directly east of the city and has some good one day and overnight walks based on the Bibbulmun Track. Suitable for most of the year except hottest summer days.

Bibbulmun Track is a  marked, 964 km walking track that runs from Perth to Albany and takes about 7 weeks to walk. Three-sided timber shelter huts, tank water and pit toilets are provided at each campsite. Best time to walk the track is spring during wildflower season, but autumn and winter can also be enjoyable. The track passes through a number of towns along the way as well as karri and tingle forests and long stretches of coastal heathlands.

Monadnocks Conservation Park. The granite peaks of Mounts Cuthbert, Vincent and Cooke on the Bibbulmun Track make good destinations for one-day and overnight walks. Located south-east of Perth they can be accessed along good tracks from Sullivan Rock, a day use area on  the Albany Highway.

Stirling Range National Park. North of Albany, this park contains the only major mountain range in the southern half of Western Australia and is one of the few places in the state where snow occasionally falls. The west end provides excellent one-day walks to the isolated summits such as Bluff Knoll, the highest in the range. The park is best visited in spring for the extensive diversity of wildflowers, many of which grow nowhere else.

Stirling Range Ridge Walk, The Stirling Range National Park contains a rough, three-day, ridge-top traverse of approximately 26km one way. This unmarked route, also known as the Eastern Peaks Ridge Route, begins from the north east corner of the park and rises on to Ellen Peak and finishes at the Bluff Knoll car park. It is suitable only for experienced walkers. As with most walks in this part of the state, the best time is in spring.

Cape to Cape. A marked, five-day walking track follows the coast from Cape Naturaliste to Cape Leeuwin. The track passes close to Margaret River and has many access points so is also good for shorter walks. Suitable all year round.

Murchison River. The river is the main feature of the Kalbarri National Park north of Perth. Most walks follow the river gorge and range from one to five days. Suitable most of the year except summer.

Kimberley. A huge tropical wilderness area in the north of the state. This vast area has many rivers and plateaux to explore.  Access is difficult and it is only suitable for extended walking trips. Avoid the wet season; most walking is done in winter.

The Purnululu National Park is known for the rounded, rocky domes that dominate the Bungle Bungle Range. Walking is confined to the narrow canyons and gorges with a number of popular one-day walks. However, well-prepared walkers can enjoy the walk along Piccaninny Creek for an overnight camp. Limited access to the area is by four-wheel drive only. Suitable for the dry seasons of autumn to spring.

Dial 000 and ask for Police to report a bushwalking emergency.

Interstate visitors should check reciprocal arrangements with their state or territory ambulance organisation.

International visitors should confirm they have travel insurance that covers rescue operations.